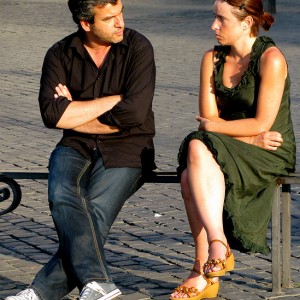 In most every divorce, there is a first date to come within a year of the papers being finalized. It can be quite awkward stepping out into a world you thought you’d never see again, and it can be even worse when the dates turn out like the ones in these stories from reddit. Here are some of the most memorable examples of “what have I got myself into” moments. Learn from these experiences!

1. “Went out with a girl for a first date. She took me to a Kumdo lesson, which is a Korean sword fighting sport. I thought that was cool, but it was an advanced class and I made somewhat of a fool of myself but all in good fun. Anyway it turned out that she was bringing me there because she wanted me to be part of a documentary about foreigners in Korea. So my looking like a fool was broadcast nationwide. We then visited the grandmaster’s house for makeolli and the film crew started interviewing me. They were basically focusing on my relationship with the girl I was going out with. They didn’t seem to understand it was a first date. So here I am trying to answer awkward questions without embarrassing both of us on national television.”

2. “There was a guy who had been asking me to hang out for a while and I finally said yes, he wanted to hang out at his house with his roommates so I went. He took me into the basement where there was a dirty mattress on the floor and nothing else. I ran. To this day I have no idea what it was about but I ran and never told anyone about it until now.”

3. “I went on a date with a guy that I met online. He told me to dress nice and that he was going to take me out for dinner. He took me to Subway, ordered a foot long teriyaki chicken sub. He looked at me and said, “I hope you like teriyaki chicken”. We shared the sub in his car. … Safe to say there was no second date.”

4. “Went to pick a girl up at her house after meeting on a dating website. She seemed significantly larger than her photo, but only in the lower abdominal region. This is when I realized that she had failed to mention that she was pregnant.”

5. “I dated a girl for 2 years, thought I was gonna marry her. She invited me on a camping trip with her family. Turns out it was her “family,” as in 100ish people involved in a doomsday cult.”

6. “Went on a date, guy brought me to weight-loss seminar, tried to sell me $1,000 worth of weight-loss products, and then tried to recruit me to join their networking business.”

What are some of the most awful first date stories that you’ve heard? Sound off in our comments section.