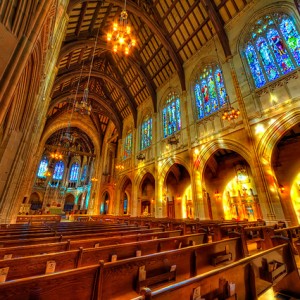 In September, the Social Science Research Network (SSRN) released a study of the factors that lead to a stable marriage. The study — entitled, “A Diamond Is Forever And Other Fairy Tales: The Relationship Between Wedding Expenses And Marriage Duration” — revealed a number of data that shed light on who was likely and less likely to get a divorce. Among the different data sets looked at, SSRN turned an eye to church attendance.

While some studies have shown that Christians are just as likely to get divorced as non-religious people, a more in-depth look reveals the opposite to be true.

If you are a PRACTICING Christian who attends church with your spouse regularly, then you are 46 percent less likely to end up on an online divorce site or in court fighting over the kids.

That’s right. Active churchgoers end up in more stable relationships than those who don’t go. On the other hand, those who admitted to only going sometimes showed to be 10 percent MORE LIKELY to get a divorce than those who never went at all.

The takeaways are clear.

If you feel like your marriage is beyond saving — churchgoer or not — and you would like to know the easiest way through the divorce maze, read some of our online divorce reviews to determine whether a DIY service or a divorce attorney are right for you.